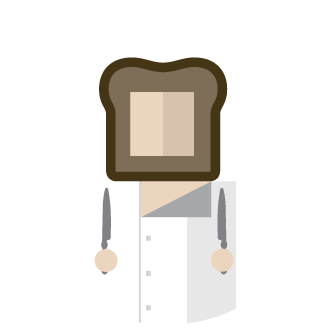 Chooses one person at night. That person's role is blocked and they die one night later. Sided with the mafia.

The Toaster chooses someone to toast each night. The person who is toasted will not be able to perform their role actions that night, and will die the following night unless saved by the Doctor. The Toaster’s toast is poisonous premium organic rye bread, and it is lethal if not treated. Finding toast on your doorstep is both a blessing and a curse. It tastes so incredible that you’ll completely forget about doing your role.

The Toaster is the most powerful and one of the two most important members of the Mafia. Try to seem extra innocent and not draw suspicion when you’re the Toaster. Toasting the Doctor means that the Doctor will be roleblocked and unable to save anyone. Use this to your advantage and try to find the Doctor as early as possible so you can get two kills per night (one from toast and one from Reg Maf/GF). If you can toast the Doc and kill the Creep, you can still be found by cops, but you’ll get two kills and won’t be caught by Creep (unless Creep self-creeps and tells the GD). You usually want to toast people who are less likely to be crept, because if you are caught by the Creeper, you put the Mafia in a tough position moving forward. If you think the Sniper is going to snipe an inno, let them. Don’t toast them in that case, but keep in mind they may just be tricking you to avoid being toasted. Toast wisely. Always be ready to switch whom you’re toasting in case information is revealed before the night phase ends early enough that you still have time to change. Self-toasting is a high-risk, high-reward strategy. If you toast yourself or another member of the Mafia, you risk dying if you accidentally toast the Doctor the following night, so this is a scenario in which you don’t want to toast the Doctor. The advantage to self-toasting is it makes you or another Mafia member look like Village. Be careful. If the person you toast is likely to be crept, including you, then this could backfire.

The Toaster can be killed by the Granny. They are seen by the Creeper. The Cop can still get investigation results even if toasted if there are two cops and they both investigated. Re-toasting a Doctor will kill them unless they are saved by another Doctor. Toast-killing someone will both roleblock them AND kill them that night, but then there won’t be any active toast so you won’t have a chance to kill two people the following night.