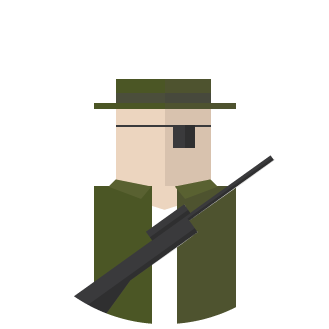 Can kill one person per game at night. Sided with the village.

The Sniper is the village vigilante. They have one bullet to use for the whole game, starting night two. The Sniper’s goal is to kill a member of the Mafia at night. It’s rumored that the Sniper does 360 no-scopes from a warehouse rooftop just outside the village, mainly to keep their distance from the Granny. While the Sniper may have perfect accuracy, they forgot to buy more than one bullet. Again.

With great power comes great responsibility. Your bullet can win or lose your team the game, so if you’re not sure, don’t shoot. Sniping to prove a Bulletproof claim late in the game is sometimes useful, even though you risk sniping an innocent person. In the event of a close courthouse between Village and Mafia, vote with the side that you suspect is more likely to be Mafia; even though it will make you look suspicious in the moment, it will pay off. If the Mafia sees that the Village is switching the vote onto a member of the Village, they may hop on board. Then quickly change your vote back and you’re caught with a panicking Mafia who will instantly follow your vote. The Village will suspect you for voting wrong so the Mafia will not want to toast you and prove your innocence. Now you have an easy snipe target and you’re unlikely to be roleblocked. Obviously sniping Godfather, Toaster, Mafia, or Kamikaze is best, but this is a numbers game at all times so sniping non-killing Mafia members is still helpful and can win the Village the game if you time it right. Sniping the Kamikaze is often valuable as it prevents them from blowing up a member of the Village during the day.

The Sniper does not lose their bullet if toasted, but they can’t snipe on the night they are toasted. The Sniper does not die to Granny and is not seen by Creeper. They are awarded another bullet when revived by the Gravedigger, even if they already shot.