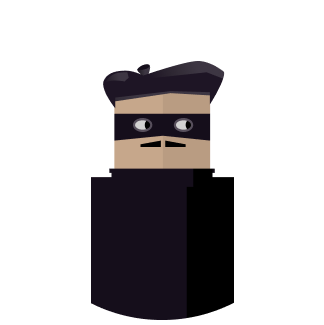 Has two attempts to steal an item. Can take a Sniper’s bullet, Bulletproof’s vest, or Gravedigger’s shovel, rendering it useless. Sided with the mafia.

The Robber is the mafioso who specializes in burglary. The Robber is stealthy and does not visit. He robs quietly. Two times per game, the Robber can choose someone to steal from. He can steal the Bulletproof’s vest, the Sniper’s bullet, or the Gravedigger’s shovel. Those roles will not recover their stolen items for the rest of the game. They will be notified that they were robbed the morning after the robbery.

The Robber is stealthy and does not visit, so he cannot be killed by the Granny or caught by the Creeper. If the Robber tries to rob someone and the Traveler visits the person, the Robber won’t be able to steal anything other than the Traveler’s guitar, which does nothing.