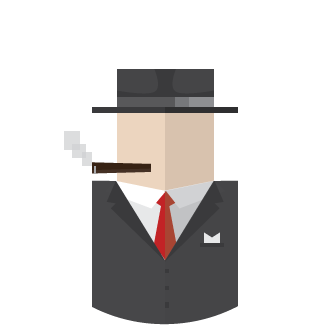 Visits and kills one person each night. Wins if mafia outnumber the village. Sided with the mafia.

The regular Mafia (often called Reg) kills someone every night. These fellas are a family like you’ve never seen, and you wouldn’t suspect that they stay up all night deciding who’s life to ruin. Don’t get on their bad side or let them know your suspicions. It might be the last thing you do.

When you’re mafia, try and act the same as you act when you’re village. Spend less time in the Mafia Chat so you aren’t obviously quiet at night. Usually, if there are multiple Reg Mafia alive, only one should kill to minimize the chance of having one Mafia member discovered by Cops and another discovered by Creeper on the same night. This strategy could also prevent the Godfather from being caught by the Creeper. If a member of the village is clearly quiet for long periods of time during the night, they may be Cop or Gravedigger. You want to kill the Gravedigger early in the game before they try to revive. If you kill them the night they revive, you waste a kill. Have a role to claim ahead of time in case you’re asked to claim -- quicker claims are usually more trustworthy. Try not to target unconfirmed members of the village or you might accidentally run out of roles to claim. On some occasions, it may be best to toast-kill someone. This means both the Toaster and the Mafia target the same person on the same night, but remember -- if you do this, no one will die from toast the following night. This is often useful when you know the Doctor or Gravedigger and you want to prevent them from saving/reviving, and you also want to take them out the same night. You can also double kill someone. You attack them the night they were going to die from toast so that they die even if the Doctor saves them. This can be a better tactic than toast-killing because someone can still die from toast the next night. However, it means that the person will still be able to complete their role action for the night, so they may be able to snipe or revive if they are Sniper or Gravedigger.

The regular Mafia can be investigated by the Cops and can be caught by the Creeper. The Mafia is susceptible to the Granny’s shotgun. The Mafia does not kill the Bulletproof on the first attack, but if they’ve already been de-vested then they can.