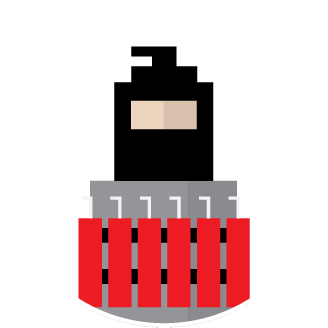 Chooses one person to kill during the day. The chosen person and Kamikaze both blow up and die. Sided with the mafia.

The Kamikaze chooses someone to blow up during the day phase and that person dies with them. They cannot blow up when arrested by the Deputy. The Kamikaze has a growing side business counseling others and has helped many people work through their problems. He has a good heart, but is ironically riddled with a deep underlying problem himself. Nothing makes the Kami more angry than being accused, and he’ll take out anyone who opposes him, even if it’s the last thing he does.

Gravedigger, Sniper (with a bullet), and Doctor are usually your main targets. It’s better to avoid blowing up unconfirmed people. You want it to be harder to find your teammates. That means you should blow up people everyone knows is Village, because the Village won’t ever vote them. Keep people alive that the Village could believe would be Mafia. As an expendable member of the Mafia (because you can take someone down with you), it’s your job to protect the Toaster and the GF! If someone claims a Creep lead, you can CC Creep, or if someone claims a Cop lead, you and Interrogator/Framer can claim Cops (if there are two cops). If there’s not a lead on a Mafia member who is more important than you, it’s often best to wait to blow up. If there’s no reason to stick your neck out, don’t give the Mafia one fewer number too early by sacrificing yourself. You’re an important vote. Late in the game, you’ll see members of the Village say, “Can we not vote Kami?”, so it’s good if at that point you can seem like Toaster/Reg/GF so they want to vote you out, but you’re actually Kami so you can take someone with you. It’s all about the numbers. If you are arrested and there’s a Cop lead on you, the Deputy has essentially rendered you useless. If there’s a Framer, claim that you were framed and push hard. Choose an unconfirmed role and claim to be framed. For example, if the Creeper is not confirmed, claim framed Creep. Do something so the Deputy doesn’t force you to waste your explosion opportunity.

Can blow up someone during the day phase unless arrested. BP does not die if Kami blows up vested BP. If BP has already been de-vested, then the Kami blow will kill them. Blowing up the GD will prevent a revive; blowing up Doc will guarantee a two-kill night for the Mafia, unless they hit BP or Granny. Blowing up Sniper who still has their bullet will prevent the Sniper from taking out a Mafia member with their bullet, but if you suspect the Sniper is going to snipe an inno, don’t blow them up. Let them snipe. Never blow up the toasted person! You are wasting the toast when you do that.